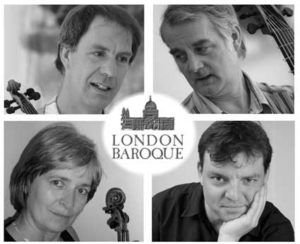 “We are used to the high standard of these players. The tireless variation of phrasing and dynamics of the individual parts, the perfectly coordinated agogic detail together with the highly imaginative approach lead to wonderfully lively music-making”, (Aug 2001) “… the performances were immaculately controlled, at all times a delight to the ear — supple, flexible playing which touched the heights of virtuosity and the depths of emotion” (Financial Times, 1980)

London Baroque continues to give vital and enriching performances with all the technical perfection and musical maturity their public has come to expect. They have performed in most of the major European festivals, appeared frequently on TV and radio the world over, and tour regularly in Japan and the USA. Their repertoire spans a period from the end of the sixteenth century up to Mozart and Haydn with works of virtually unknown composers next to familiar masterpieces of the baroque and early classical eras.

Recording now for BIS (after a long and fruitful collaboration with Harmonia Mundi France) London Baroque’s recent releases have received great critical acclaim; “Sympathetic and alert… with some finely poetic playing. These performances seem to me model.” (Gramophone, Sept 2001) and “They have never made a better disc and neither have I heard a superior performance of any Handel trio sonata.” (Goldberg, July 2001) — both of their disc with Emma Kirkby of Handel sacred cantatas.
And of their release of Vivaldi Op. 1 trio sonatas; “London Baroque bring their customary virtues to these performances, including excellent internal rapport and blend, a richly mined string tone, passion and intensity.” (Gramophone, March 2001)

For a group that was formed in 1978, staying relevant in a digital age has become something London Baroque is proud to say they’ve embraced the online changes.

Not only has the internet been born, but you’ve also seen the birth of Youtube, Facebook, Twitter and a slew of social media sites including Snapchat.

Facebook has made it easy. Regardless if  you’re a business, a band, or a non-profit group, it’s imperative to see where the people are congregating and creating a conversation around your passion.

There’s people all over that have a common interest, it’s simply a matter of finding them, connecting with them and giving them what they want using Facebook ad targeting, you can get up close and personal with exactly who you’re targeting.

Just about any type of targeting is available with Facebook and it’s one of the simplest ad platforms that bands can utilize to stay in front of their biggest fans.

And that’s what London Baroque has been able to do.

Even though the music industry has evolved from the days of old but it’s still about getting the music in front of the people that have a passion for it, enjoy it, and wanting more.

With timeless pieces, the music will live on forever despite the technology that may change how we consume.

Enjoyed by generations to come on platforms and technology that haven’t even been born yet.

I’d like to believe that even Mozart would have even more fans on Facebook if given the opportunity today.