INGRID SEIFERT was born in Austria and studied the violin in Salzburg and Vienna. Her interest in early music started while finishing her studies at the Salzburg Mozarteum. After playing occasionally with Concentus Musicus, Wien and a period of study in Holland she co-founded London Baroque with Charles Medlam and the late John Toll. She now works almost exclusively with the group and plays on a Jacobus Stainer made in 1661.

Born and educated in Edinburgh, RICHARD GWILT has degrees in music from the University of Birmingham, and the University of Michigan, USA where he started playing the baroque violin. He joined London Baroque on his return to England in 1983. In addition to his work as a chamber music specialist, he is increasingly in demand as a musical director and conductor. He is professor of baroque violin at the Hochschule in Cologne and also teaches regularly in Portugal, for the Academia de Musica Antiga de Lisboa and Norway (Ringve International Summercourse). In his spare time Richard composes and edits and publishes 17th and 18th century chamber music, as RG Editions.

CHARLES MEDLAM studied the cello in London, Paris, Vienna and Salzburg before becoming interested in the bass viol and early performing styles. After a year lecturing and playing in the resident string quartet at the Chinese University of Hong Kong he returned to Europe and studied with Maurice Gendron at the Paris Conservatoire, Wolfang Herzer in Vienna and subsequently cello with Heidi Litschauer and performance practice with Nikolaus Harnoncourt in Salzburg. He founded London Baroque with Ingrid Seifert and the late John Toll in 1978. He plays a 7-string 17th century English bass viol made in around 1680 and a Perugian cello made by Finnocchi in about 1720.

STEVEN DEVINE studied music at Oxford University and harpsichord with the late John Toll. As conductor he works regularly with the Mozart Festival Orchestra, New Chamber Opera in Oxford and was recently appointed Associate Music Director of Opera Restored. Steven is the Co-Principal keyboard player with the Orchestra of the Age of Enlightenment, which he directs from time to time. Ever since his schooldays, Steven has been associated with the Finchcocks Collection of historic keyboard instruments in Kent and was recently promoted to the post of Director of Education. He has been Professor of Fortepiano at Trinity College of Music since 2003 and joined London Baroque in 2007.

IRMGARD SCHALLER comes from a musical family in Salzburg, and studied from an early age at the Mozarteum, where she attended classes in performance practice with Nikolaus Harnoncourt. Subsequently she specialised in baroque violin at the Royal Conservatory in The Hague, graduating in 1989. Since then, she has played with many well-known orchestras throughout Europe, including The English Baroque Soloists, La Petite Bande, and Anima Eterna. She is also very experienced as a chamber musician, having played with Concerto Palatino, Ensemble 415, and the Taverner Players. These days she plays primarily with London Baroque and Frans Brüggen’s Orchestra of the 18th Century. 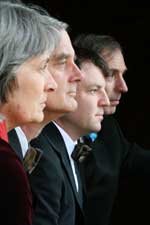